“Tower Heist” definitely has some heavy hitters behind it, but it seemed as if the marketing campaign was quite lackluster considering the names involved in the project.  Even though the movie wasn’t pushed hard, the quality of the film was high, and it stands solidly within the comedy genre.

Honestly, I wasn’t expecting much.  I don’t know anyone who has seen this movie and I hadn’t heard anything positive or negative about the film, so with only a couple of Amazon reviews under my belt I decided to rent it on faith.

I was pleasantly surprised. Essentially, the film follows Josh Kovacs (Ben Stiller) as he gathers a ragtag group of ‘thieves’ after a corrupt Wall Street investor (Alan Alda), at the upscale apartment building they work at, swindles away the staff’s savings and retirement.  Eddie Murphy (Slide) and Alan Alda’s (Arthur Shaw) performances are the two standouts of the film.  Seeing “M*A*S*H’s” Hawkeye onscreen again playing a villain alongside the 1980’s Eddie Murphy was nostalgia at its finest.

If you are hankering for a lighthearted romp through the comedic forest check out “Tower Heist.”  It is good for a few laughs, and at the very least you get to see a slice of the ol’ Eddie Murphy that we’ve missed for so long. 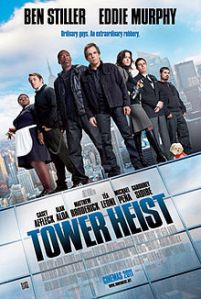 I will warn everyone right away: if you are a huge Hunter S. Thompson fan who has been craving for a page-for-page adaptation of “The Rum Diaries,” akin to “Fear and Loathing in Las Vegas”—go home.  Don’t rent or watch this film, because it will disappoint you.

I have read “The Rum Diaries,” but personally I was not expecting an exact translation (rather the opposite) so in the end I was quite smitten with the result.  It follows Paul Kemp (Johnny Depp) and his crazy adventures on the island of Puerto Rico (1960) as he drinks, writes, and staggers through life’s unusual predicaments.

Overall, I found the film to be funny and filled with clever lines and situations.  The humor will not be for everyone, but if anyone has ever described your humor as being offbeat, or dark, then check out “The Rum Diary.”  It will tickle your funny bone, but do not hold it to Thompson’s stellar work because the film obviously fell from a different banana tree than the source material.

One thought on ““Tower Heist” and “The Rum Diary””