“Drive” is one of those movies that you either really dig it, or it just kind of flops for ya.  Personally, I didn’t find it to be the worst movie on the planet, but I definitely didn’t dig it.  As a Cannes film festival contender, “Drive’ is very neo-noir and European Art House.  There are many shots that are supposed to come off as edgy and unique, but instead they create an inconsistent tone that rises and falls throughout the film.  At points it works and compliments the plot as well as the violence, and at other times it falls flat by trying to be something more that it is.

Ryan Gosling plays the lead character, which remains unnamed throughout the film.  I reckon that the intention was to create such an iconic character that his mere presence would be remembered, almost akin to Edward Norton in “Fight Club,” Uma Thurman in “Kill Bill Vol. 1,” Clint Eastwood in a many a film, etc. etc.  There were certain set pieces like his Scorpion jacket that add to the characters mystery and aura, but we’ll see if Ryan Gosling’s driver holds up to Clint Eastwood in the future.

The plot centers on Gosling as he becomes increasingly entangled with his boss’s (Bryan Cranston) mob problems/connections and his love interest that lives down the hall from him (who also strangely enough as a connection to the same criminal ringleader via her husband).

I don’t want to delve too much into specific scenes or the meat of the plot, because in all honestly you might appreciate the bits that I didn’t.  It’s just one of those films that needs to be checked out by curious.  Personally, I won’t be watching it again; it just didn’t creep up my alley, which is surprising considering it’s a Cannes film.  I’m usually quite partial to indies. 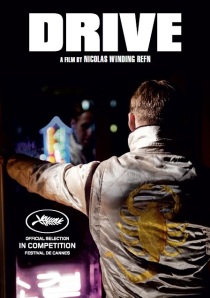 “Killer Elite” is one of those films that had almost no buzz or PR in the U.S., so it inevitably fell underneath the radar for most folks.  However, after walking through my local movie rental store time and time again, passing by a cover graced by Jason Statham, Robert De Niro, and Clive Owen–I had to check it out.

The plot isn’t jaw dropping by any means, but it is excellently executed.  Essentially, Danny (Jason Statham) and Hunter (Robert De Niro) are retired SAS and work as assassins for hire.  After finally getting out of the game and settling down Hunter is captured setting in motion a turn of events that forces Danny to come out of retirement and hunt down three other assassins in an effort to free his mentor and friend.  Supposedly “Killer Elite” is based upon a novel by Sir Ranulph Fiennes entitled, “The Feather Men” that was highly disputed and controversial during the time of its UK release in 1991.  Lets just say that the British weren’t too happy about “The Feather Men’s” contents.

Nevertheless, the film adaptation of the novel holds its own.  It’s a great romp through the inner workings of espionage, shadowy groups, assassins, mercenaries, and false fronts.  “Killer Elite” also has one of the best fight scenes that I’ve seen in recent history.  Statham squares off against two adversaries whilst tied to a chair–it beckoned awesomeness.  To paraphrase my “Safe House” review you can’t go wrong with Denzel Washington Robert De Niro. 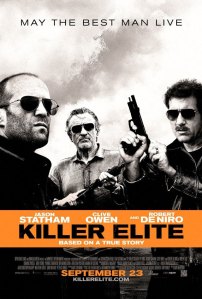