Life is a jumble.  Sometimes everything stacks up nice and neat, but all it takes is one slight maneuver and the Jenga Tower just comes tumbling on down.  The part of the puzzle that is different for all of us is the quickness in which we build the tower, how high we build it, and how we rebuild it after it has collapsed.  I could probably expound on the aforementioned metaphor and say that each color represents a facet of our personality and that the flaws that cause the collapse of the tower are the ones that makes us stronger in the rebuilding of our beacon; however that level of detail is in a mindset and post of its own, so I’ll segue from ideological digression to something more grounded.

The last several weeks have been filled with craziness.  My girlfriend’s parents recently moved out of state leaving her feeling slightly uneasy.  All of her family now either resides in Idaho, or on the Westside of Washington State.  In their move, we helped whenever we had a chance to, and at the end of the day we ended up adopting one of their dogs to ease their move.  His name is Cody (aka Kodiak) and he is an incredibly well behaved and cute Chihuahua.  The sad part to the whole affair is that when he was a pup someone decided that negligence and abuse was the way to proceed, so unfortunately his back legs are horribly skewed because both of them were broken after being caught in a mesh kennel and then left to mend improperly.  The same individuals who left his legs shattered and misshapen, also felt it was necessary to solely feed him human food, which subsequently rotted out all of his front teeth leaving him with only his more sturdy back ones to do the munching.  When he pants he looks like a little old man, but even throughout all of the torment he is a well-adjusted, sweet, and handsome son-of-a-gun.  As I’m writing this, he is tightly wound into a little ball softly snoring away.  I’ve already become incredibly partial to him and hopefully with some diet and exercise his little chub will slowly dissipate and his legs can begin to heal. 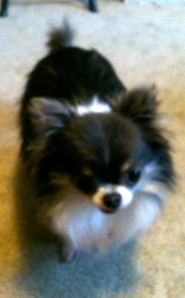 Along with the adoption of the Chihuahua, I have been fervently writing as Celeste and I gear up for the Spokane Comic-Con.   I was fortunate enough to be able to cover the Vertigo relaunch and restructure last month, which led to quite a swell in viewership.  The Avengers vs. X-Men, which is the big Marvel summer event, just released last week and looks to be a promising 12-part arc that will pit the mightiest of the Marvel Universe in an epic slugfest.  And, at the moment, I am working on a review of Scott Snyder’s “Gates of Gotham” miniseries that premiered last year, before the DC’s new 52, as a kind of prologue to a series of articles that I will be composing about Snyder’s new Bat Family crossover story arc dubbed “The Court of Owls.”  Snyder is a superb writer and continues to push the boundaries of storytelling in both of his critically acclaimed Batman and Swamp Thing runs, so if you get a chance grab a Snyder graphic novel or comic—you won’t be disappointed.

As for the novel, “Jack and the Lilac Butcher,” I’ve kept up by fleshing out scenes here and there, and I am hopeful that the first act of the novel will be wrapped up in a couple of weeks.  It’s been a blast to write and it seems as if inspiration abounds, but I suppose once you are in love with something, whether it be a person, an idea, or a character, it is difficult not to be inspired.  In all likelihood I will post several chapters of the novel back-to-back here on WordPress, at the Writer’s Café, and at Wattpad.  I have been meaning to become more involved in Wattpad.  It seems like a great community of writers and readers that definitely deserves more of my time.

Just the other evening I finally wrapped up Clive Cussler’s “The Race” after slowly slogging through its whimsical pages.  My haste was deeply lessened with work and various sidetracks, but I was eventually able to finish the novel.  I greatly enjoyed it.  It was a fantastic period piece set in the early part of the twentieth century, specifically focusing on the early days of aviation, and the fictional Van Dorn Detective Agency’s various Pinkerton-like exploits.  I have now moved on to finally finishing King’s “Wizard in the Glass,” so that I can dive into his newest Dark Tower novel, “The Wind in the Keyhole,” which releases later this month.  Even though I have not finished the Dark Tower saga I am greatly intrigued by the fact that King has returned to his masterpiece after all this time with a fill-in novel.  Hopefully, this will give me the necessary push to finish the series that I have so longed to read, but never ‘found’ the time to enjoy.  With a stack of books at my bedside I have found that Goodreads has been an excellent site to virtually house all of my reads and want-to-reads, while simultaneously engaging in literary discussions.  If anyone is interested, or already as an account, send me a follow and I’ll make sure to follow back.  I always love to see what others are reading.  There is always a hidden gem in someone’s library.

Well, I am off to dive into the endless sea of pop culture that I ‘oh-so’ love.  A latte, a cozy Chihuahua, some Queen on vinyl, and a bought of writing are in order for this blogger.  A hat off to everyone, and hopefully the sun is shining wherever you are.

6 thoughts on “The Deepness in Jenga”