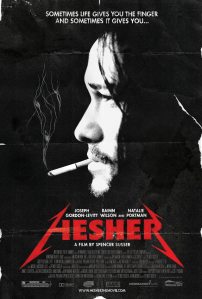 “Hesher” premiered at the Sundance Film Festival in early 2010, but it did not hit theaters Stateside till mid-2011.  Unfortunately, because of the slip in release dates, I nearly missed a superb film!  Had I not caught a trailer for it on another indie, it would have most likely ended up in the void.  Luckily for me, Amazon.com carries the title for a scant $1.99 to rent.

“Hesher” is an oddball film to say the least, and it will not be for everyone.  But, if you are naturally geared towards low-key, unique movies that everyone else seems to miss, then this is the flick for you.

“Hesher” follows T.J. (Devin Brochu) as the world proverbially crumbles around him.  After losing his mother in a terrible car accident, T.J. and his father naturally fall into a deep depression, whilst they try to grapple with a world without their mother/wife.  The talented Rainn Wilson plays T.J.’s father, and I have to say it is absolutely fantastic to see a more comedic actor flex his acting chops in a more serious role.  Paul tries to be there for T.J. when he can, but because of his state of mind he does not possesses the will to properly take care of his grieving son.  To pick up the slack T.J.’s slightly scatterbrained grandmother, Madeleine (Piper Laurie) tries to step and take care of both her mournful boys.

And, even though Madeleine is a tad absent-minded, she is trying her hardest to be the grounding rod for T.J. and Paul.  She understands the heartbreak that they are experiencing, and she desperately tries make them realize all that they have around them—which includes her.  Unfortunately, the two are in such a deep state of despair that neither one realizes the importance of their extended family until it is too late.

The name of the film, “Hesher,” is in reference to Joseph Gordon-Levitt’s eponymously named character, Hesher.  In lame man’s terms, Hesher acts as a sort of insane, rocker fairy tale character whose sole purpose is show T.J. and his father the importance of living.  Seemingly out of nowhere, Hesher comes crashing into their lives, sending T.J. and his family on a whirlwind course for better, and sometimes for worse.  He is rash and seemingly crazy, but through a series of misfortunes Hesher teaches both T.J. and Paul an important life lesson.

Here is a brief recount of the craziness that ensues in Hesher’s presence:

He torches a sports car, hits T.J. with his van, tells several inappropriate stories as anecdotes about life, throws a barbecue and numerous other garden objects into a stranger’s swimming pool, and lights a springboard on fire while diving into pool loudly asking, “R2 to shut down all the trash compactors.”

All in all, this is just a small part of the madness that Hesher brings to the table, but in the end Gordon-Levitt’s brash character has a point about life. And, at times Hesher doesn’t even realize that he does—he’s just living day-to-day.

In a sort of side tale that stems out of the relationship between T.J. and a reoccurring bully of his Natalie Portman is introduced as the ingénue, Nicole.  Nicole is the wayward, do-gooder who just feels like life is constantly kicking her down, but as her life becomes increasingly intermingled with T.J. and Hesher’s an odd friendship develops between the three that inevitably helps all of them.

Overall, the tone is fairly dark throughout the film, and can be easily described as a ‘black comedy.’  The movie deals heavily with loss, depression, and addiction, but as the film ebbs and flows with Hesher at the forefront of progress it begins to unfold more as modern fairy tale and not the typical Greek or Shakespearean tragedy.

This film will not be for everyone.  It can be brash and inappropriate, but in good conscience I can’t not recommend this film.  It is truly creative and fresh.  Personally, I would have loved to write a character like Hesher—it must have been a blast to write.  Joseph Gordon-Levitt plays him excellently and is the star of the show.  He really steals the spotlight in this one.

Click here for more movie reviews found in the ‘Flick It’ section of this blog!

One thought on ““Hesher””