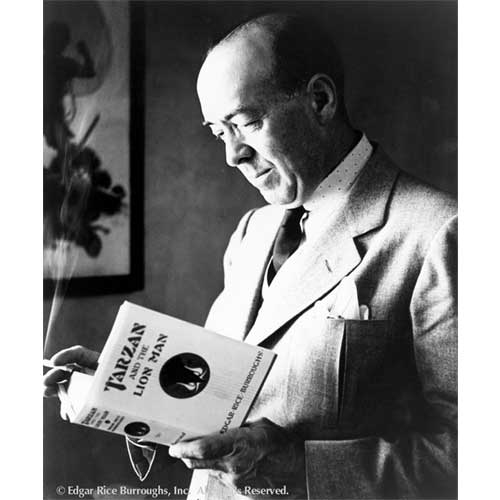 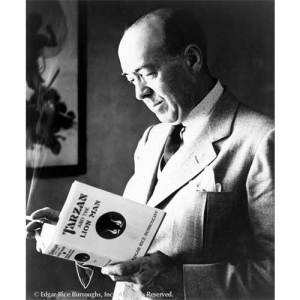 Edgar Rice Burroughs is a favorite author of mine, however my interest in him and his work is relatively new.  Burroughs captures some of my favorite genres easily and comfortably by exploring science fiction through character development and creating modern day fairy tales which represent philosophical movements.  His prose his clean and simple which really wasn’t a popular style till about a decade later after his first foray into publishing.  Both accounts amaze me, but alas I was and still am a neophyte.  I was clueless and ignorant (as I often am), until I watched Disney’s film adaptation of Burroughs second most popular series, “John Carter.”

Personally, I enjoyed the quality of the film, but what I got most out of the movie was the love and appreciation for an author that (at the time) I knew next to nothing about.  I dived headlong into his work.  I quickly read the first three John Carter novels in a collection that I purchased off of Amazon for a small, paltry sum.  They are truly magnificent.

If you ever get a chance, gobble ‘em up.  They are incredibly well-written, but the human quality and realism that Burroughs brings to his writing makes the otherworldly settings and characters background noise rather than the main spectacle.  From there I dived into Tarzan.  Contextually it seems oddly, but in actuality it is a fairly logical segue considering Burroughs’ work.  I’ve made limited headway on the series (partially because there are over 20 novels), because honestly I am not a big fan of the character.  Unfortunately, I am several generations removed from enjoying the meaning of the series.  The primitive movement was big after the second World War and it just has never connected with me as it did to so many upon their release. 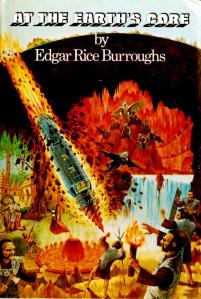 However, I did dive into Edgar Rice Burroughs’ “Pellucidar” series, which begins with the Vernian “At the Earth’s Core.”  “At the Earth’s Core” is a quick read (it only clocks in at roughly 150 pages), but it does create a great founding point for Burroughs to expand upon and unlike Jules Verne’s “Journey to the Center” Burroughs builds an entire franchise (and thus universe) upon the back of the ideas originally laid down by Verne a generation before.

I have yet to find a copy, but I have heard that there was a film adaptation of “At the Earth’s Core” in 1976.  I haven’t explicitly removed everything from my plate to seek it out, but I am positive that I will one day find a lazy afternoon in which I will be able to sit down, find, and watch “At the Earth’s Core.”

Tangentially, I first discovered “At the Earth’s Core” at a wonderful bookstore out in Coeur d’Alene, ID called, Browsers (not to be confused with Mario’s archenemy).  I ended up purchasing “At the Earth’s Core,” “The Land that Time Forgot,” and “Llana of Gathol.”  All of which were copies re-published throughout the 1970’s, which greatly pleased me because I am exceedingly tired of solely coming across movie and television book covers.  For whatever reason, they sour the experience for me.

Regardless of cover, I encourage all to read at least something of Edgar Rice Burroughs.  He is an amazingly talented author, and his breadth of work has spurred various schools of thought, inspired millions, and ultimately helped shape current pop culture even though he began writing over 100 years ago.