Gotham’s “The Balloonman” takes a much different tone than prior episodes—  You can almost see the visible growing pains as it flexes, to find its footing within the market of genres.  It is almost as-if the bloat of Gotham is weighing heavily upon the FOX’s executives’ and producers’ shoulders.  It is solidly placed, but they are still beginning to show signs of television fatigue.  That careful balance between cop show and comic book show still hasn’t been fleshed out properly by Gotham, but it stretches to get closer still with “The Balloonman.”

“The Balloonman” is the first episode to hit home on the episodic nature that Gotham needs to get into.  Like I’ve mentioned before, Gotham is struggling to appease comic book fans and television goers and—for granted—Batman is a force to reckoned with.  The iconic Caped Crusader has spawned countless successful media properties over the course of several decades and comic book-wise it continues to reach the top of the charts in terms of sales and accolades.  However, how do you make a series about Batman not be about Batman, and still keep fans coming back for more each and every week?  You make it a cop show centered-around the GCPD.

Gotham begins to hit its cop show stride with “The Balloonman.”  It begins to break away—albeit just for a moment—from the disjointed campiness of past installments, “The Balloonman” tries to shake its identity crisis by picking a formula and sticking to it.  Focusing on a criminal that is (you guessed it) attaching balloons to ‘legitimate’ criminals and sending them sky high to their deaths is more-interesting than past villains, merely because Jada Pinkett Smith’s overacted portrayal of Fish Mooney isn’t involved…anything without her is better.

However, even with the inclusion of a minor criminal that draw the attention of GCPD for just a moment is better than before, but it is still…well…Balloonman.  The episode tries to embrace a cop drama, but it is still executed rather poorly.  I praise the effort, but for Gotham to survive it needs to take a creative cue from similar supernatural cop dramas such as ABC’s Forever.  Forever takes a cliche premise, but back it up with a clever slant and an episodic quality that draws audience members for an hour-long, twisty and clever journey through the investigative process.

This is what Gotham needs to be.

The writing for “The Balloonman” is fairly straight-forward and there isn’t even an attempt at providing a feint or a ‘food for thought’ moment for the audience  The writing belittles fans in its simplicity, and if you are up to date on your actors and their respective appearances it will be quite easy for you to immediately spot the non sequitur…and thus the Balloonman.

Even though the writing is lackluster, I do appreciate the angle that they are trying to take, more-so than a superhero epic that is forced to exclude Batman due to the premise.  In my opinion, for Gotham to survive and be a multiple spanning series it desperately needs to become a ‘cop show.’  It needs to invest in providing in depth investigations with surprises and unusualness, all the while focusing on the character growth and camaraderie of Detective James Gordon and Harvey Bullock.

Unfortunately, at this juncture, television shows such as Arrow, The Flash, and Agents of S.H.I.E.L.D. are doing it better.  If you’re inclined to catch a superhero show to fill in the time between the films, check out the aforementioned shows, because Gotham isn’t cutting it…yet.

The second episode of Gotham already feels a little too at home in its time slot and station.  Holistically broken down, Gotham isn’t honestly that good.  This is difficult for me to write.  I’ve spent quite a bit of time breaking it down into its parts over-and-over again in my head, and I’ve come to the conclusion that I was misled by my own hobby.  I am a huge comic book fan, but I’m not a huge Batman fan.  However, most of the seminal Batman works I appreciate and I keep tucked away in my repertoire for when I write about comics and when I am asked about them.

This is where Gotham gets me.  It plays into my fandom.  Although, to survive on television it essentially has to be a cop show, because it cannot exist as continuing series merely focusing on all of the many characters of Gotham—  Even that would run its course quite quickly.  It has to be one to last, because the origin story of Batman, or a retelling of Miller’s Batman: Year One, is not enough to create a sixteen episode series that will last multiple seasons.

So when you start to breakdown the cop elements of the show, you begin to notice the poor construction of the show.  Basically the good cop (Detective Gordon), bad cop (Detective Bullock) follow a loose lead on the good cop’s intuition and goodwill—  From there they have a tussle with the bad guys (but they get away), the investigation hits a wall, and in a last minute saving grace the good cop figures out where the bad guys will be and the two go and bring ‘em down. 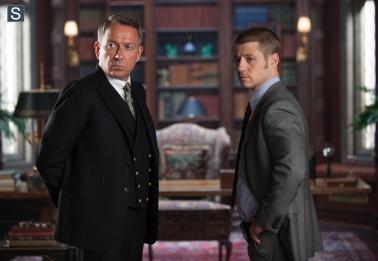 Both episodes have played out exactly like this, which unfortunately makes for uninteresting television.  It is bad, formulaic writing for a show that should be well-within its ‘Wow, it’s Mr. Freeze’ stage of its life.  But, that is where it hooks comic book and Batman fans, because now audience members are looking for the next Clayface and Penguin references, or when is the Joker going to crop up?  It is more about the minutiae and detail of the lore, rather than the quality of the television series.

Episode two runs the same gambit—  Street kids are being kidnapped off the streets, Gordon pushes to investigate, eventually they find out where some of the operations are taking place, there is a tussle, the villains get away, and the show wraps up with the good cop, bad cop duo tracking down the kidnappers and bringing them to justice.  There are two small subplots intertwined throughout the second episode:  One following Kyle as she gets entangled in the street orphan, kidnap plot.  The other as the Penguin begins his brutal climb to (hopefully and eventually) criminal kingpin.

The episode’s title, Selina Kyle, suggests that the episode is primarily about her, but she is relinquished to the background and only crops up as a means to further the fairly straightforward plot.  The writing is merely ok (this is self-evident in the title), but the acting is often muddled and overplayed.  It already has the marks of an aged show.

However, it’ll most-likely retain its numbers, because well…it’s Gotham.  It is Batman and it strikes a chord with comic book nerds (like myself) and the millions strong that hold Batman dear to their little nerdy hearts.  As TV show, Gotham is below average—  Not the worst, but with offerings like Sleepy Hollow and Agents of S.H.I.E.L.D. there is far better television to watch than Gotham this 2014-2015 season. 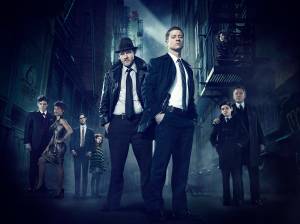 Right off the bat (no pun intended), I will fully admit that I am not the biggest Batman fan.  He isn’t my favorite for a variety of reasons.  However, I don’t detest him and I have read quite a bit of the lore due the sterling influence of my wife (although Cap is slowly digging his shield in further…yay!).  I think that Christopher Nolan’s Batman trilogy is superb filmmaking and perhaps the best rendition of the Caped Crusader to date, and if the UK’s Rocksteady has any say in my video game habits I will (once again) be purchasing the CE of next June’s Batman Arkham Knight and blitzing through a spectacular campaign and all-around awesome game.

Nevertheless…I digress, my hate/love relationship with Batman is rather moot, considering that Fox’s Gotham is the Bat media in relative question.  I was trepidatious about the whole affair.  I felt that the media gurus at DC and Fox were pushing for something that couldn’t be successful.  It was announced early on that none of the DC properties would relate, so there was no hope for an Arrow crossover or any bleed through to the films, and the castings are mostly unknowns…and comparatively young— Taking a page from the casting news of Fox’s Fantastic Four reboot, releasing 2015. 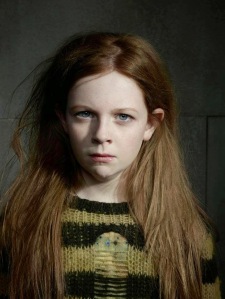 If I was going to watch Gotham I wanted Batman, not boy Wayne and the teen villain brigade.  However, what I did not expect…happened.  Instead of focusing on Bruce Wayne and the Batman, Gotham focuses on a young (not yet, Commissioner) Gordon and the exploits of the Gotham Police Department.  Throughout the GCDP’s ongoings and happenings audiences are privy to a plethora of Gotham City easter eggs.  This was a pleasant surprise because it takes a well-worn and critically acclaimed page from Frank Miller’s Batman: Year One (1987).

We get to see Poison Ivy as a girl, Catwoman as a thieving teenager, the Penguin as a conniving subordinate, a young comedian yet touched by chemicals, and a host of other side characters in the Gotham universe.  It is quite interesting, and I found myself giddy guessing who was whom and how their futures would eventually intertwine within Gotham.

Ben McKenzie plays a fantastic young, Detective Gordon.  His voice is just gravely enough, and he plays the part of the outsider trying to do good in a corrupt city.  The show primarily follows Gordon and his partner, Harvey Bullock (played by the talented Donal Logue).  The pilot starts out strong and in manner that I did not expect—  It was almost surprising.  Throughout the pilot’s plot (a murder investigation), Gotham sets the tone, mannerisms, and host of characters to be fleshed out in future episodes and seasons. 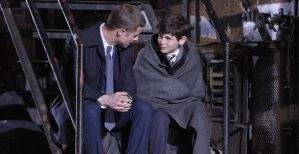 The only downfall to Gotham is that it seems geared to fans who know a little bit more about the comic book lore and healthy does of knowledge concerning all of the nuanced characters of Gotham and how they relate.  This is great for an old school comic book fan like myself, but in inquiry I found that quite a few people found the show corny at moments and not as cohesive as Arrow, or its older, quality counterpart, Smallville.  More often than not, these individuals are willing to give the show a couple more episodes to see if they’ll warm up to it, but the general consensus is that was good but not great like comic book fans are making it out to be.

Nevertheless, I am willing to give it more time to come into its own.  It hooked this anti-Batman fan, and I am curious to see if Gotham can be groundbreaking or not— Time will tell.  Check back here next week for a recap of the second episode of Gotham airing on Fox on Mondays at 8/7c.