Well, Celeste and I just returned from our friends to the South, with Hanz in tow.  Luckily the Mexican authorities didn’t want to stir up any trouble, so with a couple of Benjamin’s passed their way they were more than willing to hand over Mopey the Ferret without any questions.

Hanz, however, is slightly traumatized by the event and has been particularly solemn the past couple of days.  He just keeps his head hung low, and even the stewardess on the plane couldn’t get him to eat his complementary peanuts.  Any reference to “nuts” just pisses him off even further because it reminds him of Mr. Peanut the Squirrel, which has now become his arch nemesis.  It even states it on his driver’s license that his arch nemesis is Mr. Peanut.  He just has to send in the confirmation, and then they can battle freely in the streets.

I was surprised that the plane ride didn’t make him at least a tad bit happy because how often does Hanz get to wear his flying outfit from his Abercrombie & Fitch days?

Anyhow, the only time he has perked up at all is when the in flight film happened to be “Evolution” starring Hanz’s beloved David Duchovny.  I think if he didn’t have David he would be Hanz the Comatose Ferret, instead of Hanz the Mopey Ferret.

Ultimately, he’s decided to stay at our apartment once again.  I think his trust for us has been rebuilt since we came and rescued him from Mexico.  Also, Malicious Gorilla seems to comfort him.  As quiet as Malicious Gorilla is he seems to make Mopey the Ferret feel very at home.  I find them cuddling quite often when I get up in the night to head to work.

Hanz head is nestled tightly in Malicious the Gorilla’s forearm as he slowly rocks him to sleep.

I woke up this morning to find Mopey the Ferret and Malicious Gorilla gone!  My ’93 Protégé is missing as well, and the only thing to mark that they had even lived here is the large amount of feces in the closet where Malicious resides and a hastily scrawled note that reads, “Gone to Hollywood to meet David. ~Hanz”

Honestly, the only part that surprises me is that Malicious went with Hanz…hopefully they’re all right, but the hell how am I supposed to get to work now? 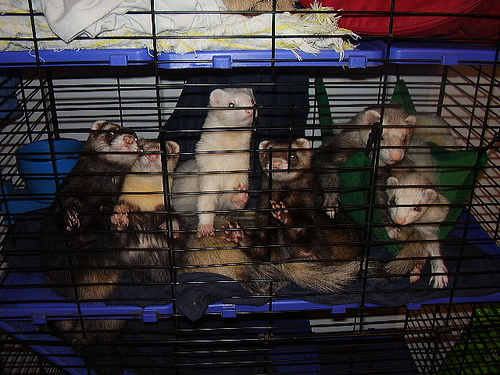 Today, I woke up groggy like most mornings, glanced over at my phone, which glimmered with a picture message icon that had been sent from an unknown number.  I didn’t think much of it at the time and I ended brewing some coffee, placing my annual Chihuahua racing bet for Cinco de Mayo upon Zoomie Schultz, and then started into some much-needed relaxation by slaying Goombas before I decided to check the message.  I couldn’t believe my eyes once I opened the message!  I’d describe the horror to you, but you’ll just have to see what I received in order to believe it.  Here’s the pic I received this morning on my mobile:

Apparently, Hanz was in trouble and had sent me a last-ditch message pleading for his safety as well as the safety of others.  Luckily I know a guy, who knows a guy, who also knows a guy, who was able to help me out.  After a lengthy game of phone tag I eventually found out where Hanz and gone and what had happened.

Apparently, he ran off from my parent’s house shortly after a particularly terse argument with my sister Caitlin about how David Duchovny is NOT the greatest actor in the world.  This argument occurred yesterday morning, so he had only been on the prowl for a day or so.  This argument enraged Hanz and he had promptly ferreted off with his duffel bag and Orange Lantern, Lantern in paw to a supposed friend’s house.

Apparently while in Arkham he met another inmate who was liked-minded and was released just a tad earlier than Mopey.  His name is Mr. Peanut and he happens to be a crazed, health nut of a squirrel obsessed with ruing the day.

Mopey thought that he could trust Mr. Peanut because of the experience that they shared, but as soon as Mopey entered the squirrel’s abode he was abducted via drop down cage and quickly shipped off to Mexico for several pounds worth of peanuts and a canister of Whey Protein.  Now Mopey is residing in a Mexican prison cell on Cinco de Mayo with other enslaved ferrets that also thought they had made a friend with a macho squirrel named Mr. Peanut.

Normally on Cinco de Mayo Hanz would make his traditional nine layer bean dip, watch and bet on the Chihuahua races at my parent’s house, and get liquored up like he always does.  The most trouble he’d ever cause was maybe peeing in a garden or two before collapsing into a pile clutching his empty box of wine and autographed picture of David.

Nevertheless, as I write this post my girlfriend and I are packing.  We’re going to Mexico, and we’re rescuing Hanz!  And, once we return it will be Mr. Peanut the Squirrel who will rue the day!

Unfortunately I haven’t written about Hanz our ferret in a while; not because I’ve become apathetic on my personal accounts of the dubious adventures of Mopey Ferret and the Malicious Gorilla, but rather because Hanz has simply snapped.

I had just come home from the Safe, thrown my keys onto the counter top (like I always do), and was in the process of grabbing a cup of coconut enriched coffee when I looked up and saw Hanz.

Apparently he had spent the evening drinking again and watching Braveheart over and over, and like all viewers of the movie Braveheart had fallen into a deep semi-drunken coma with his furry little paw still clutching his Bacardi bottle.  When he had awoken he had trashed the apartment, ripping out the closet doors revealing Malicious Gorilla’s domain (in which he peered at me around the corner now), dyed his fur with blue food coloring, and fashioned a rudimentary spear out of my Bushido stick that I keep in our office. 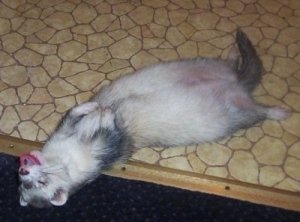 From there he had headed out on the balcony of our apartment covered in blue war paint, frantically hopping about the railing screaming in Gaelic, with his crudely made spear threatening the neighbor’s cat.

I had no idea that he was even outside much less making all that racket!  I couldn’t hear through the sliding glass, but as soon as I saw him I spit out my coffee, and ran for the sliding glass door.  As soon as I opened the door Hanz was on me in flash.  He was biting, gnawing, cursing…I couldn’t help but scream!  All the while the dumbass cat across the way just stared at me as a rabid ferret hopped up on his own imagination and insanity with way to many scenes of Braveheart in his little fuzzy cranium attacked me!  I eventually beat him off of me and trapped him back out on the balcony.

From there he just menacingly staring at me through the glass with his Bushido stick in one clutched paw and his Orange Lantern, lantern in the other.

Anyhow, long story short, I ended up getting a Tetanus shot that day and ultimately submitting Hanz to the Arkham Asylum for the Criminally Insane.

Today is the big day where I get to pick up Hanz from the Asylum.  Hopefully he’s been rehabilitated (we’ll find out I suppose!).  I know Malicious Gorilla has been missing his regular beatings and I even have to admit that life isn’t the same without my Mopey Ferret.

I feel as if I’ve let my readers down by not divulging into the complex and sensitive nature of my gorilla’s psyche.

Therefore I present to you a small nugget of the intricate nature of the malicious gorilla who has assumed Prince’s neglected symbol.

Well, Hanz had his evening of ‘fun’  with Barb the Comcast hooker, and boy it did not play out how I expected it to…apparently Hanz is either confused upon his sexual preference or the hooker did something to traumatized Hanz to the point of fur raising.

I just don’t know what to do anymore…

Last night I got home from work after his botched hooker experience and I found a passed out ferret within the confines of my booze fridge…his fur was all matted and nappy like long-haired Dachshund, and he had finished off a whole fifth of Vodka and had popped off the top of my Captain Morgan’s spiced rum!  That little bastard almost drank me dry!

Upon gaining consciousness he threw up an old union bill and sauntered back into the closet of solitude where he proceeded to have a bonding moment with the gorilla or a mild molestation case ensued…either way the gorilla, as always, seemed to just stare straight ahead, unmoving, and stoic.

The next afternoon I took Hanz out for lunch hoping to at least gain some sort of understanding as to why he had, yet again, achieved a high level of mopiness; however, he just stood upon the table lapping up his beer with his whole head shoved in the mug just as stoic and silent as the malicious gorilla within my closet back at the apartment. 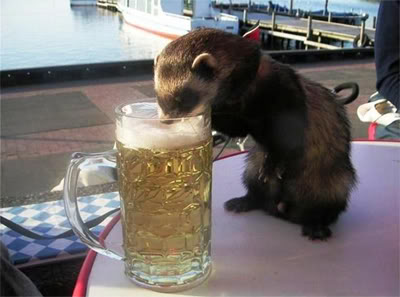 Blogged with the Flock Browser

As aforementioned…I’m just not sure what to do anymore…maybe I’ll contact a psychologist or check him into rehab if his dabble in alcohol continues to increase over the weeks.